Hapag, the transfer between Hamburg and America, relocated its regularly scheduled transport towards New York from the port of Hamburg to Cuxhaven, which belonged to the city of Hamburg itself, at the instigation of Albert Ballin who managed the route and was named general manager later on. The passengers were sent to the old harbour’s train station in Cuxhaven by special trains.

Cuxhaven’s port facilities, however, were not sufficient for the construction of four Augusta-Victoria-Class ships (160 meters in length) which is why the passengers must have been taken over in the roads. This inevitably lead to the building of the “Neuer Hafen” (i.e. “New Harbour”) beside/by the river Elbe with two quays being 120 meters long each.

Since the liners were not working to full capacity due to low passenger figures regarding transatlantic traffic in the winter months, the AUGUSTA VICTORIA in Cuxhaven set out for a “pleasure journey to the Orient” in January. Therefore, Cuxhaven is the “home port” of cruises.

After lengthy negotiations with the railway administration, the state of Hamburg build a new harbour’s train station, nowadays called “Hapag-Halle” (officially: “Amerikabahnhof”), intended for the interests of the Hapag. The equipment provided for the 1st and 2nd class passengers’ waiting room (dome hall) commonly aroused admiration (Cuxhaven’s first place with electric light installed). It follows the mundane equipment of the ships’ common rooms, for example of the DEUTSCHLAND which made its maiden voyage in 1900 and was considered the largest and fastest ship in the world. As long ago as 1900, Hapag was the world’s biggest shipping company and even maintained this position up until World War I. By then, its lines were not limited to America anymore but were present on every continent. This significant role found expression through the entrance portal which led straight into the Hapag Hall’s dome hall. Here, Hapag’s motto “MEIN FELD IST DIE WELT” (i.e. “The world is my field”) was displayed above the heads of two seamen, even though it unfortunately fell victim to the delusional modernisations of the 50s.

With the AMERIKA and KAISERIN AUGUSTE VICTORIA also having travelled between Cuxhaven and New York, Hapag again possessed the world’s largest ship.

Due to the fact that the port facilities turned out to be too small again for the ships being active since 1900 – these ships were forced to take over the passengers in the roads just like at the beginning of traffic – the western quay, being 120 meters long, was lengthened by 60 meters. The land facilities were supplemented by the “Gedeckter Gang”.

After the commission of the British ship TITANIC, the competition for the world’s largest ship continued. For the IMPERATOR and other ships of its class (VATERLAND and BIS-MARCK) the two docks were joined together and deepened. That way, the then largest pier worldwide, with a length of 400 meters, came into being: The “Steubenhöft” (called that way as recently as 1931). The “Neuer Hafen” was thus extended to the “Amerikahafen” from 9 ha to 42 ha while being meant to serve as a base and equipment port for the Imperator-Class ships.

Until the outbreak of World War I, there was an unprecedented and even unparalleled railway traffic concerning the train station “Hapag-Halle”. On days when both, one ship arrived from America and another one left for it, up to 13 special trains carrying as many as 4000 passengers were processed. Since these special trains had priority over the ordinary traffic, the latter faced significant delays. For this reason, plans were made that involved extending the double-track railway by another track but were never put into operation due to the war.

After World War I, Hapag lost the majority of its ships due to the provisions covered by the Treaty of Versailles. As a consequence of an ingenious contract policy, however, it succeeded in regaining a decisive role in transatlantic traffic because of chartered ships that have been in the shipping company’s possession before. Nevertheless, conditions in passenger traffic changed significantly after the war. Passenger figures never reached pre-war dimensions again. This basically results from the revised immigration policy of the United States of America which limited the number of immigrants considerably.

After passenger traffic at the “Steubenhöft” was in abeyance during World War II, as well as it has been during World War I, it was affected by the aftermath of war in the course of this period. British troop transports repatriated military personnel while German prisoners of war landed here and were conveyed to “Munsterlager” for their discharge by trains. 30,000 displaced persons migrated to Canada via Cuxhaven.

Having chartered Hapag’s ITALIA, passenger traffic between Hamburg/Cuxhaven and New York, as well as towards Canada resumed. The wooden “Steubenhöft”, which did not undergo any maintenance work during wartime and the post-war period, was substituted by a new construction made of steel and concrete of the same name and place until 1954. Towards the waterside, it received a reception building with galleries for passengers and spectators which combines with the Hapag Hall, the Customs’ hall and the “Gedeckter Gang” into a complex of buildings being more than 300 meters long and which is under monumental protection since 1970.

With the HANSEATIC, the then largest German-flagged passenger ship was commissioned after the war. It replaced the ship ITALIA and its transport service to New York which was, as well as its successor HOMERIC, limited to transports to Canada. Both services faced sig-nificant competition with the emergence of air planes. This lead to the abandonment of transfers to Canada in 1963 while many liner transports towards New York were cancelled and substituted with more lucrative cruises. After the HANSEATIC flared up in New York in 1966 and it became apparent that repair was economically unreasonable, there was no oversea passenger traffic at the “Steubenhöft” in 1967. In 1968, a second HANSEATIC was commissioned that finished only four liner transports to New York and served with cruises exclusively afterwards. 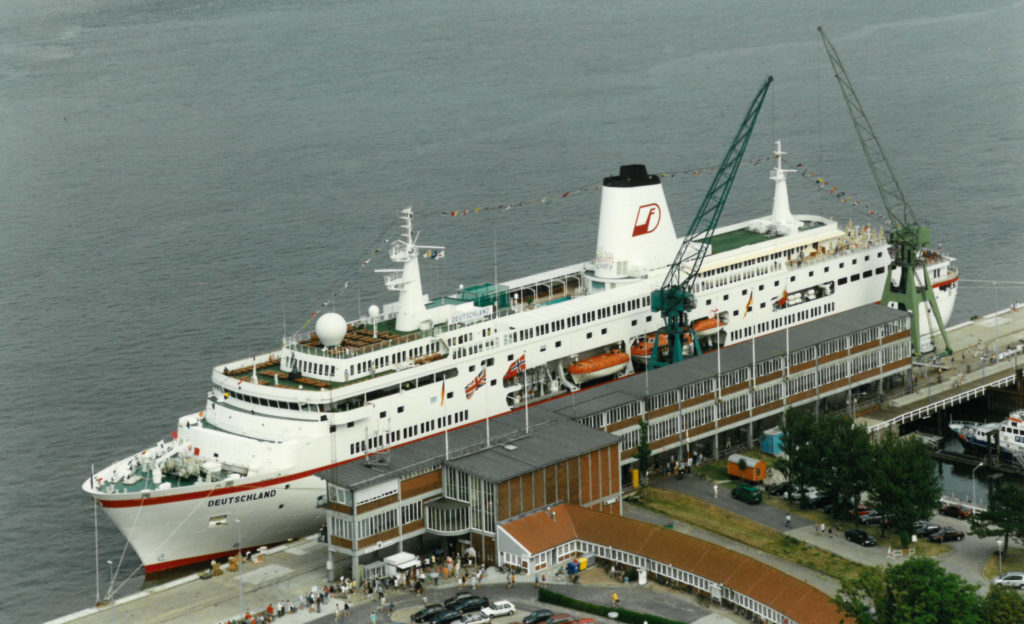 After the end of the transatlantic liner services the terminal Hapag-Halle/Steubenhöft was used for cruises only, as like as in other European terminals too. During the 1970ies und 1980ies the cruise ships HAMBURG, HANSEATIC and ARKONA (former ASTOR) visited often the terminal, also MAXIM GORKI and other soviet cruise ships. Since 1998 the new build and in Germany very popular cruise ship DEUTSCHLAND of the Deilmann Shipping Company started and ended its cruises to the Nordic countries and around the British Isles.

After the transmission of Cuxhaven (“Amerikahafen” with “Steubenhöft” and Hapag Hall), a former property of the state Hamburg, to the state Lower Saxony, there were various consid-erations how to continue the usage of the historical facilities. Since 1999, the support association “Förderverein Hapag-Halle Cuxhaven e.V.” exists and conducts guided tours and exhibitions concerning emigration and passenger shipping inside the historical passenger terminal. Within the reception building “Steubenhöft”, there is the exhibition “Abschied nach Amerika” (i.e. “Leaving for America”) which informs visitors about the oversea passenger traffic in Cuxhaven from 1889 on.
During the same period, there were considerable developments in the field of passenger shipping. Cruises were supplemented by the last German ferry’s service to England, which was relocated from Hamburg to Cuxhaven, between 2002 and 2005. Unfortunately, this service had to be abandoned as well due to the severe competition represented by air planes. In addition, cruises were abandoned in 2013. Regarding the latter, the harbour of Hamburg proved to be a strong magnet and landed the service of passenger traffic. Replacement for losing these services, can be found in the resumption of ferry traffic across the river Elbe towards Brunsbüttel since 2015. As many as ten departures per day ultimately lead to a remarkable stimulation of service at the terminal and also inside the reception building with its exhibitions.